Yes, another year comes to a close and end of the year lists appear all over the media!  2019 wasn't all that great of a year, even taking into account all of the graduations, break ups and various changes that any idol group goes through.  It was one of those years when I had to decide before writing this article whether or not to include some of the more mediocre idol songs that I've heard this year just because I felt my favorites list was a bit short.  My opinions and interests are obviously going to different from everyone else who listens to idol music, since I rarely pay attention to the mainstream, so here is what I felt about idol music of 2019.

2019 began differently for me.  For the first time ever I started paying attention to Korean pop music.  This is mostly due to a friend who told me about a Korean kids idol group named Vitamin, created by Clevr Entertainment & Music.  (Yes, Clevr is spelled this way.)  Through Vitamin I then discovered their sister group PIERCE.  Both groups featured a talented girl named Kim Naye.  Naye became my favorite Korean idol rather quick due to her beautiful, multi-octave voice.  So there was life beyond Japanese idols!  It has made me wonder if I should start a blog about Korean idols or if I should write about them here.  But I've resisted the urge to mention my interest in Korean idols (at least those from Clevr E&M) until now.  I may not write more about them here, but those who are interested may join my fan group for Vitamin & PIERCE.

On July 15, 2019, one of my favorite idol groups, amorecarina Osaka, broke up.  I wrote about them extensively in my last article for this blog.  Since then I was lucky to acquire a 4 disc DVD-R set containing their last performances!  I don't think this was done when amorecarina Tokyo broke up, and I don't think amorecarina Nagoya has DVDs available either.  I feel very lucky to have obtained them.

I think I'll just get on with my favorite songs of 2019 now.

My favorite song of 2019 comes from a group named Hiwillow.  They are a local idol group now consisting of four girls, although they had three when they debuted.  One of the original members, a girl named Maaya, has left the group.  The group now consists of Shiki, the leader, Risa, Runa and Mei.  There are a few videos for Hiwillow on YouTube, but many of them are poor quality or have the songs cut short.  I am going to link a full live for Hiwillow, although the first song and my favorite, "Cherry", starts at 4:11 into the video.


One of my favorite new groups of 2019 isn't technically a new group.  SAKURA MODE is the reformation of the group Otan 43, a part of SAKURA MODE PROJECT.  I also wrote about them in my blog earlier in 2019.  SAKURA MODE consists of three girls, Harashima Miu, Yuduki Ramu and Harashima Ruka.  Two other girls from SAKURA MODE PROJECT are performing as soloists, but SAKURA MODE are the only ones with new, original songs.  Unfortunately SAKURA MODE disbanded on December 21, 2019 when sisters Miu and Ruka both graduated.  This really disappoints me as the manager of the group, Shun Eguro, actually thanked me on Facebook for promoting SAKURA MODE on my page Young Idol Singers!  He even told me they intended to go global.

Here is the song "MY MODE".

COLORLESS are a group that's been active for a year, but I guess I never paid attention to them until recently.  I started watching a girl named Shimooka Rihika on SHOWROOM Live during the summer.  Around October I saw a COLORLESS live video on YouTube and then promptly forgot about the group.  Then after hearing an audio-only video for the song "PUZZLE" (which doesn't seem to be on YouTube anymore), which was linked to Rihika's SHOWROOM Live room, I suddenly became interested in the group!  Doing a bit more research as I write this I now see that "PUZZLE" is not a new song from 2019, but rather 2018.  This video seems to be the original version of the song, from November 2018.  However, I'm going to include a link for the new live version simply because I like the group and this escaped my attention last year.  Actually, there were songs I would have included on last year's best of list had I remembered or waited until after Christmas to write my article.  Anyway, here is the live debut of Rihika, which includes "PUZZLE" shortly after the intro.


I've been a fan of the group Devil ANTHEM. ever since their debut, but I think I've only mentioned them once in my blog.  Well, it's time I mentioned them again as they have one of the most rockin' songs of 2019!  "Fake Factor" mixes some heavy guitar chords in with Devil ANTHEM.'s usual EDM (Electronic Dance Music, for those who don't know) and it sounds pretty good to my ears!  I also love the special effects in the video.


A group that debuted last year performing classic Japanese pop cover songs is Marble Angel.  The group had two original songs released this year, including this song, "Smile".  Unfortunately for fans of Yamaguchi Raira, the girl in the pink costume in this video, she has now left the group.  On the same day (November 10) that Raira graduated, three new members were introduced but didn't actually perform with Marble Angel until December 15.  Here is Marble Angel's live debut of their first song from July 7.


monogatari came back strong in August 2019 with the short new single "for Me", which features some nice vocals and, in my opinion, good percussion work!  The heavy eye makeup is a bit much, though.


Si☆4 released a new CD for their single "Niji Iro ☆ Mirai", but it was track two, "Kimi ☆ Adventure" that caught my attention.  I still wish a studio video with the girls wearing jungle outfits, as the promo photo features, would be nice.  (Note: In January 2020 I realized these are American Indian costumes, not jungle girl costumes.) 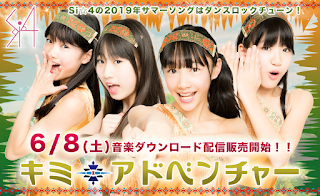 Jumping Kiss has taken much of my attention as of late, but I only really started paying attention since August or so.  It suddenly became my mission to record down the names of all the members and I have found the names (but not the birthdays or other info) of the current lineup.  Their video for "vanilla" is something I've played several times because it is catchy and fun, like all of the idol songs I'm interested in.  Members Suzuki Hiyori and Mizuno Zion are my favorites.


W. (Double V) has released a number of good songs since their 2018 debut.  Their first new song of 2019, "fake", is my favorite from this year.  It starts off with a cool EDM beat and just gets better.  Sadly, Kurumi has now left the group.


I haven't stopped watching White Rabbits all year!  This group has kept my interest with their cute songs, including new song "Hakutoshin ~Ikusen'nen no Omai~".  Member Ao will be graduating at the end of this month.


Sakurai Yune released a single early this year that was a tie-in to a game titled "Sweet × Sweet My Candy".  The game is called 'Sokubaku Kanojo' and Yune voices a character in the game.  The song is just as cute as she is!


Oh! My Kitty was one of my favorite new idol groups last year.  They formed with six members, added a seventh but starting in early 2019 have gradually lost members.  Their first original song "Helo!Helo" was performed live in March of this year, but I'm not even sure if this song is available on CD or not.  Unfortunately the group now has just four members.  But fans of Juna will definitely want to check out a commercial that she has done.


Well, that's it for this year's favorites.  I'm sorry that I didn't do more research on COLORLESS before I started typing and released that it wasn't a new song.  Last year Hoshi☆Gumi released a new song on Christmas day, and I posted my article on December 22.  New songs for favorite groups turn up on YouTube when I'm not paying attention or have Internet-related troubles and I can't watch.  As always I want to thank you for reading and I hope the new year brings you much joy!
Posted by Idol Trailblazer at 8:35 AM

Idol Trailblazer
I am a fan of many Japanese idols, but I feel there is a need for a blog that writes about and promotes those idol groups that many ignore. I will therefore try to wake up people to the fact that there is much more to Japanese idols than a few mainstream groups and soloists. I am the creator of the website Sensational Idols, which has a Twitter account, and the Facebook page Young Idol Singers. I have a diploma from the Institute of Children's Literature.